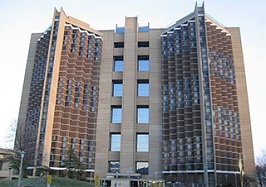 CIRBN was made possible through the ARRA BTOP initiative, but the idea to create greater access in Central Illinois was already on the minds of area leaders.

Since 2004, the Economic Development Council (EDC) of the Bloomington-Normal area held talks and conducted the studies about constructing a broadband network in Central Illinois. Though there was interest and studies pointed out many benefits, without strong financial support the network could not yet become a reality.

The next discussions took place between Illinois State University (ISU) and K–12 schools in McLean County. School districts needed more capacity at a lower per-unit cost. Districts connected to the regional POP for the Illinois Century Network (ICN) hosted by ISU. This POP services a number of counties in Central Illinois.

While focusing on the issues with the K–12 schools, ISU was approached by Heartland Community College (HCC) and the Town of Normal about their own needs. Both entities had the same connectivity issues when trying to access the local ICN POP. These discussions suggested the effort should be expanded.

Seeing the possibility for BTOP grant funding, ISU worked with HCC to host a meeting on creating a regional network in July 2009. More than 40 organizations, including higher education institutions, K–12s, municipal entities, local healthcare organizations, a local Internet service provider, and a nonprofit from the surrounding area attended. Public response supported creating a proposal to develop an application for BTOP. 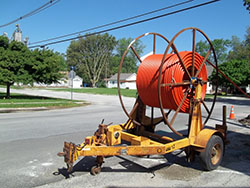 Led by ISU, a group of 10 technical and financial planners from six different organizations worked from August 2009 to March 2010 to develop a proposal for the second round of BTOP awards. The scope was defined as any public or private sector organization that could be reached with a fiber-optic infrastructure. This process resulted in the creation of CIRBN (Central Illinois Regional Broadband Network).

As the CIRBN team was approaching the BTOP due date, it was approached by the ICN to partner on this grant. The result was the IBOP-EC (Illinois Broadband Opportunity Program–East Central). IBOP-EC took CIRBN’s focus on community networks and the ICN’s focus on high-speed connectivity between communities and combined them into a single application. The creation of IBOP-EC also allowed the CIRBN proposal to secure state of Illinois matching funds for 20 percent of the total project budget. The combined application was submitted covering 55 counties with a total project budget of $96 million (of which CIRBN represented $17.6 million).

Another benefit to joining the IBOP-EC partnership was that CIRBN could focus more on communities and organizations and less on backhaul connections. By time IBOP-EC BTOP application was submitted to the NTIA, CIRBN had secured nearly 50 partners who have agreed to provide cash matches and had identified nearly 250 Community Anchor Institutions in six counties. The partners collectively provided more than $500,000 to support the initiative.

Ultimately, the ARRA BTOP program funded more than $300 million worth of broadband projects in Illinois. The state of Illinois provided more than $50 million in capital funds to match.

Although CIRBN is a unique effort in Central Illinois, it is one of many projects within the state. Illinois State University is one of three public universities within the state, including NIU and UIUC, to receive federal funding to create regional broadband networks. These projects and the IBOP-EC effort will be historically significant as our population continues to develop dependence upon high-speed connectivity and uses it to compete more effectively throughout the nation and across the globe.

CIRBN has constructed more than 100 miles of new fiber optic cable throughout Central Illinois. The network encompasses six counties, 20 communities and includes more than 100 partners, such as:

CIRBN began delivering service to its first sites on July 1, 2013.